It happens every time.

About five minutes after I preorder a game, I’ll forget about it.

The result is waking up on release day, grabbing the iPad to check out what’s been going on in other time zones while mine’s been sleeping, and noticing an unfamiliar app icon staring out at me, occupying a space that yesterday, was just a space.

It’s a good feeling; similar to waking up on a Sunday and thinking it’s time to get ready for work, only to have that warm glow rush through you when you remember it’s Sunday.

And so it was Thursday morning, as I grabbed my coffee and headed out to fire up the Apple TV, to find out if Hovercraft: Getaway was destined to earn that space on my iPad and Apple TV, or if that space was to become once again, just a space. 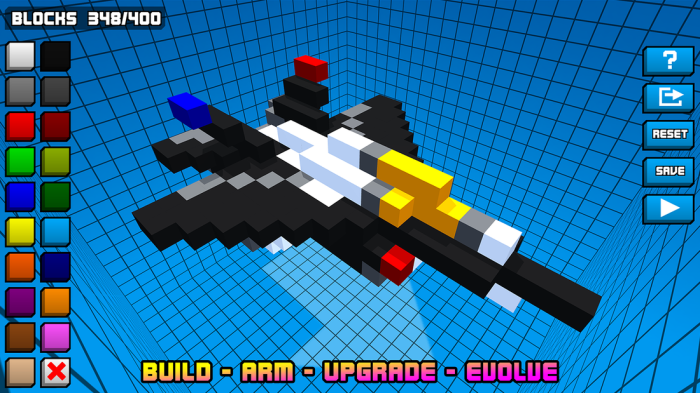 Turns out that calling Hovercraft: Getaway “PAKO Forever with guns” in ATVG’s previous post was pretty accurate. There are a few notable differences though.

As with PAKO Forever, gameplay is depicted via a top-down view, as players navigate around an arena to avoid incoming enemies. PAKO Forever is all about cop cars, while Getaway goes for a more futuristic setting, with the Fuzz chasing players through an environment not unlike Tron.

An interesting difference is that the environment in Getaway is fixed, as opposed to the randomly generated maps in PAKO Forever. This gives players in Getaway an advantage in that the map can be learned, and with familiarity comes greater evasive longevity. Getaway’s map has some variety, with varying visual textures throughout, but it would be nice to have some other maps to choose from as well.

Gameplay is simple, energetic, and immediate, and could easily be dismissed as forgettable if you only have a couple of goes. I recommend a few more, after which Getaway starts to creep into the category of very more-ish.

In a straight line, the cops always have a little more speed than your hovercraft, although your hovercraft turns a little quicker than the cops. This of course means that some slick manoeuvring of your craft left and right will keep you just out of harm’s way, but be sure you don’t turn back into trouble, as the red and blue flashing lights are usually coming from behind, and hitting them runs down your damage bar.

You also have a finite boost bar, which I’d recommend conserving via short bursts to stay in front, combined with slight turns here and there, as when you run out of boost, things can get desperate.

Both your damage bar and boost bar can be replenished by destroying pickup drones that are always a welcome sight, with green drones for boost, and light blue for damage repair. There’s also a pink drone that acts as a clear-the-screen-of-enemies relief bomb, giving you a brief reprieve from the craziness.

The longer you last, the crazier the chase, with enemies coming after you in greater numbers, and with more speed and armour. 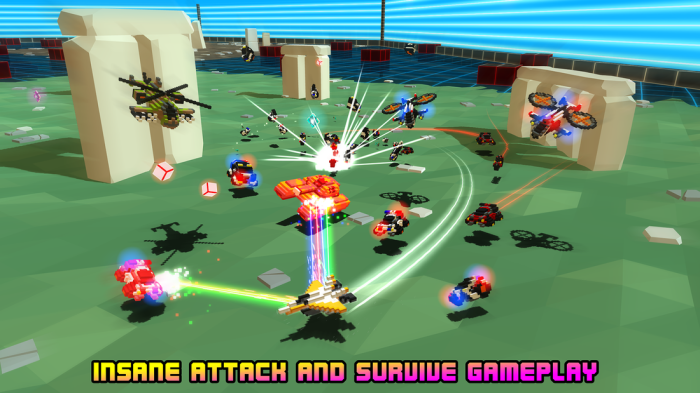 Thankfully, your hovercraft is well equipped for the task. Starting out with simple high-rate-of-fire, but low-damage machine guns, new weapons are unlocked through gameplay – collecting currency through kills as your craft auto-fires your chosen weaponry, and then opening crates earned with that currency. Crates contain new weapons (and new weapon colours for the fashion-conscious), upgrade parts, blueprints for new ships, and bonus currency.

It’s an enjoyable loop that’s easy to get lost in.

As an experiment, I took a break from the big screen of Apple TV and fired up Getaway on the iPad to investigate the cross-save functionality. I’m happy to report that my upgraded Royal Pitbull hovercraft, sporting a Tracking Sniper Rifle (low-rate but high-damage) and blue Tracking Ion Laser (high-rate, low-damage) followed me from big screen to small, and back again. Love it.

If you’ve got the time, you can build your own ship from scratch, and the user-interface is the same as in previous games in the series, but I haven’t really tinkered with it. I’m too keen to jump back into the action to evade and earn.

All the usual free-to-play trimmings are present and accounted for, with IAPs for new ship blueprints, coin bundles and so on, and when playing on iPad Getaway is ad-supported. On Apple TV of course, ads are nowhere to be seen. While this must make it tougher for studios to make ends meet on the platform via free-to-play games, I’m not complaining.

Hovercraft: Getaway is a fun twist in the series from studio High Score Hero, and while this sort of quick pick-up-and-play action is superficial gaming candy, it’s great to have titles like this in your library when feeling like something mindless and immediate. It’s arcade gaming distilled to a very pure grade.

Surely your Apple TV library has room for one more? The silky-smooth, fast-paced craziness of Hovercraft: Getaway is pure arcade immediacy. A great quick-fix for escapists.