According to studio Cornfox & Bros., the original Oceanhorn sold over a “million copies on all platforms combined.” Not bad for a little indie game that started life on iOS. For an excellent exclusive feature on the making of Oceanhorn, check out Episode 2 of Grab It Magazine, which is also packed with loads of other reviews (a bunch of them by yours truly) and gaming goodness.

Last year’s announcement of a sequel – Oceanhorn 2: Knights of The Lost Realm – had fans of the original celebrating, and everything about the series looks to be cranked up to 11 for the second instalment.

Just two days ago Cornfox & Bros. released a bunch more information about the development of Oceanhorn 2, with confirmation that it was being developed using Epic’s Unreal Engine 4, and that the studio was targeting multiple platforms. So with that in mind, what about Apple TV?

The original is available on Apple’s digital-only console, so I reached out to the developer hoping for good news about the sequel. Mash the page 2 button below for more details on the very Zelda: Breath of The Wild-looking Oceanhorn 2, and for the response from the studio (which I’ve already spoilt in the headline).

Update: Since posting this story way back when, Apple Arcade has obviously arrived, bringing with it the excellent Punch Planet. Punch Planet is an infinitely better 2D fighter than Gods of Rome, so the below article really seems redundant nowadays, but an Internet search will still no doubt have lead you here. This newer article will scratch your itch. But hey, if you’re still keen, read on!

Original Story: Actually yes, there is, although I would say it’s very much a Tekken or Street Fighter Lite, but it’s still a good deal of fun. Gameloft ported its 2D fighter Gods of Rome from iOS to Apple TV earlier this month, and have thankfully put some real effort into updating the UI (user-interface) in order to make it a nice fit for the big screen.

Hit the page 2 button below for more details.

Studio Play Pretend’s 2D action platformer is a game of two halves. It’s hard, really hard. Some, including myself, might go so far as to say that it’s a little too hard. The thing is though, it’s also really good. Le Parker is one of those games that when you’re right on the edge of frustration, and you swear this is your last crack at a level before chucking the whole thing in, skills the game has forced you to learn finally click all at the right moments, and once again you’ll find yourself back at the level-select screen with a new challenge unlocked. And off you go again (although maybe after a cup of tea and a lie down).

The ingredients making up this punishing yet rewarding dichotomy are an interesting study in game design, and well worth a closer look.

Last Sunday night at exactly 7.30pm, I stopped playing Toon Shooters 2: The Freelancers on Apple TV. A deal I’d made with my wife meant that the lounge room flatscreen was all hers, as Grigor Dimitrov and Kei Nishikori were about to face off in the final of the Brisbane International.

The thing is, I was really enjoying playing Toon Shooters 2. The side scrolling shooter from Mooff Games is a lovely throwback for fans of R-Type, but with a fun cartoon twist. There’s loads of new ships to be unlocked with different weapon load-outs, pets that add differing firepower abilities, and with Mooff Games you’re never too far away from Star Wars references. The picture above is an obvious one, and – spoiler alert – look out for the armada of Star Destroyers.

So at level 5, 7.30pm rolled around, and my time was up. But I wasn’t in the mood for tennis, I had work to do. Those aliens weren’t going to shoot themselves.

Last night I divided my game time between Trials Frontier and Atomic Super Lander, and I have to say, if you’re looking for a fun night in I can highly recommend the combination.

Developer bitWeird released its 1.1 update for Atomic Super Lander earlier this week, and the additions add some very welcome meat to the bones of what was already a very fun arcade title. Mash the page 2 button below for my impressions. 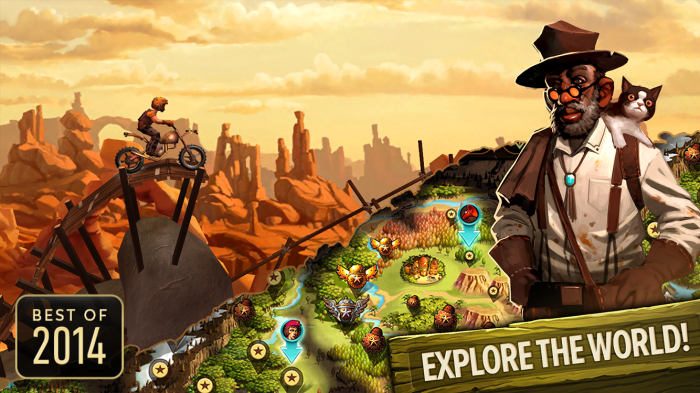 Boiled down to its essential elements, Redlynx’s Trials series is a 2.5D physics platformer with a focus on speed running. While it’s a common enough genre, the franchise has garnered fame and hardcore gaming credibility due to the precision demanded from players, made possible thanks to the developer’s meticulous application of balance. Balance across the controls, the momentum of the avatars, the ability to redistribute weight to achieve the impossible, difficulty versus playability, and the balance within level design that mixes fun with challenge.

This week the series hit Apple TV and after spending a few hours with it, I can’t wait to spend some more. Hit the page 2 link below for more.

Having recently reached out to developer Legendo and received the good news that Dracula Twins should be hitting Apple TV soon, I thought I’d do the same with studio 10tons.

10tons already have a presence on Apple TV, but after their press release in 2015 talking up the platform, I thought I’d follow up to see what else is on the way, and in particular, the twin-stick shooter Neon Chrome, currently out on iOS, Steam, and current-gen consoles.

“…we’re not sure if we’ll be able to bring Neon Chrome to the platform. Mainly the issue is about controls, pretty hard to do twin stick shooter with the Siri remote, and we’d strongly prefer not to make the game require a gamepad…” was the not so encouraging reply from 10tons. It isn’t an outright no though, with the studio adding, “…now that we’re back from holidays, we will resume investigating the matter.”

So there may still be hope for Neon Chrome on Apple TV. There’ll be an update here on ATVG if I  hear more.

The good news however, was that its vertical shooter – Xenoraid – currently available on Steam, PS4, and Xbox One, “…should make it to Apple TV though.”

The mission-based vertical shooter looks like a nice fit for the platform, with the ability to switch out your ship to one with differing abilities mid-mission adding a nice tactical element to the arcade action.

Check out the trailer below, and keep an eye on ATVG for more details as soon as they come to hand.