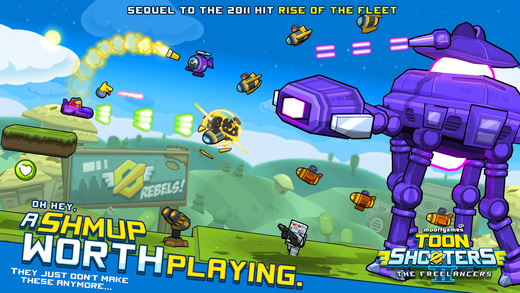 Last Sunday night at exactly 7.30pm, I stopped playing Toon Shooters 2: The Freelancers on Apple TV. A deal I’d made with my wife meant that the lounge room flatscreen was all hers, as Grigor Dimitrov and Kei Nishikori were about to face off in the final of the Brisbane International.

The thing is, I was really enjoying playing Toon Shooters 2. The side scrolling shooter from Mooff Games is a lovely throwback for fans of R-Type, but with a fun cartoon twist. There’s loads of new ships to be unlocked with different weapon load-outs, pets that add differing firepower abilities, and with Mooff Games you’re never too far away from Star Wars references. The picture above is an obvious one, and – spoiler alert – look out for the armada of Star Destroyers.

So at level 5, 7.30pm rolled around, and my time was up. But I wasn’t in the mood for tennis, I had work to do. Those aliens weren’t going to shoot themselves.