Okay, time to try something a little different with these weekly Apple Arcade releases.

Being that this is The Apple TV Gaming Blog, or ATVG for short, I thought I’d start picking a weekly feature game out of the handful of releases, with a focus on Apple TV as a console gaming experience.

The Pick of the Week will be posted a week after release, giving this one-man-band a chance to check out the contenders. Being a very subjective pick, your mileage may vary, and if so, ATVG would love to hear from you and why you think your pick deserves to take first place on this week’s podium. Hit up the social media links in the banner at the top of your screen and share your thoughts.

As you can see from the picture above, last weekend’s titles were a varied bunch as usual, and of a high standard consistent with Apple Arcade’s current library. You can read last week’s release wrap-up right here, and I recommend checking out all four of them.

This week ATVG’s nod goes to a game by another one-man-band – William Chyr.

Find your way down to that Continue button for more. 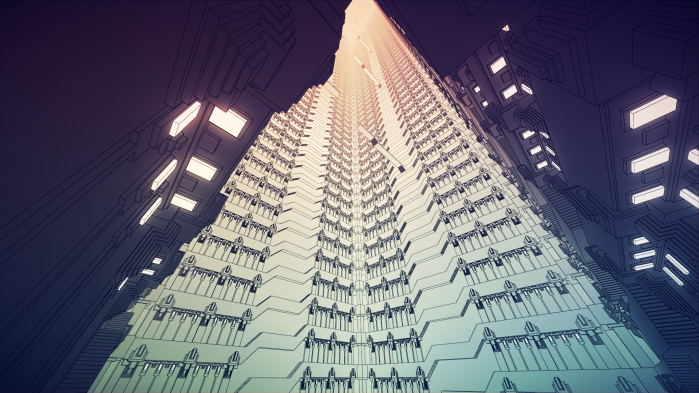 Prior to Manifold Garden’s release, based purely on the trailer (which you can view below), I described Chyr’s creation as a mash-up between Christopher Nolan’s film Inception, and Valve’s iconic game Portal, with a twist of Jonathon Blow’s The Witness. Now that I’ve gone hands-on with Manifold Garden, those comparisons feel even more spot-on.

Starting out in a well-lit room with a window on the floor, I cautiously navigated towards it, to see what I could see. I was greeted with an impossible view into what felt like infinity, and straight away felt like I was in a stylised version of the scene in Inception just before the city starts to fold in on itself.

Panning around drew my attention to an object on the wall, and experimenting with the controls I learned that the R2 shoulder button switches gravity to the wall you are facing towards, which then becomes the floor. The clean architectural lines and colour coding ensure that it’s not quite as disorientating as it sounds.

Over towards the switch – activated with the DualShock 4’s X or Xbox One and Steel Series Nimbus’ A button – and I opened the door, allowing egress from the first room. First lessons learned.

A few more puzzles later, slowly increasing in complexity, and I found myself in the great, great outdoors.

While Manifold Garden makes for a great iPhone or iPad puzzler, the bigger the screen the better. Chyr’s version of an endless universe of skyscrapers that dissolve into the distance, wrapped and tied by staircases and precarious ledges deserves to be enjoyed in large flatscreen glory. Infinity should granted all that you can give back to it.

I’d read in Chyr’s development blog that falling off a ledge would land me back where I started, as the world wrapped around itself, turning my mind inside out. So with a leap of faith, I fell. And fell.

And yes, with a metallic thud, eventually landed back where my fall began. Players can actually guide themselves directionally while falling, and with patience and enough laps around the universe, are able to navigate towards different structures. I even took one of the portable puzzle-solving blocks out from within a room and threw it off a ledge, with an intuition at what might happen, and I was right. A few seconds later, the block came from above, dropping past my line of vision, heading off on its second lap of gravity’s endless loop.

Yes, the lines are sharp and clean, but there is a heart-felt artistry within this infinite garden, saving it from what could have been a cold experience. It’s no surprise to learn that Chyr is also an installation artist, with some beautiful work showcased right here.

Even the menus are stylishly designed with fonts and layout complementary to the gameplay, so players don’t feel jarred out of the experience by going into the Options to tinker with the settings.

I’ve a feeling that I’ve only just begun with Chyr’s offering, and the finish line may be a while away, especially given that puzzling prowess is not a strength of mine. But I’ll forge on, if only to spend some more time within this logical madness.

William Chyr’s Manifold Garden deserves your attention, and it’s absolutely deserving of being the first of ATVG’s Picks of the Week.