If site traffic is anything to go by (and it is), then many of you out there in Internet-land are waiting very keenly for Oceanhorn 2 – the upcoming JRPG from Cornfox & Bros. Anytime ATVG posts news of its development, traffic flows. And from what’s been revealed so far, that high level of anticipation is definitely warranted.

While iOS is so far the only confirmed day-one release platform, ATVG reached out in 2018 to the studio and received an encouraging reply:

“I’m personally quite convinced that we will eventually cover the same platforms as we did with Oceanhorn 1, tvOS (Apple TV) of course being one of the main platforms,” wrote Cornfox’s Antti Viljamaa.

So with optimism, ATVG continues to keep a keen eye on developments, even making room for the sequel in our Most Anticipated Apple TV Games of 2019.

This week Cornfox & Bros. unveiled lots of juicy info outlining Oceanhorn 2’s three main characters, who will make up your adventuring party. A little of their backstories were revealed, and a few hints at the weapons and abilities they’ll contribute to proceedings, giving a glimpse at how they might work together to save Arcadia. 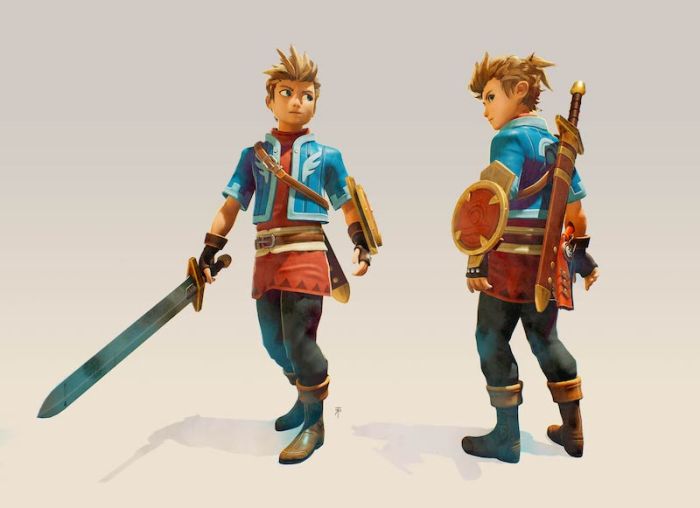 Were his parents psychic? Did they have a vision that in about 18 years time the world of Arcadia would need saving, and that their son would be the only one with the appropriate skillset to save it?

Is that why they named him Hero? Or was it just a lucky coincidence?

I’m not sure if this mystery will get solved during Oceanhorn 2, but the question does deserve to be asked. I’d feel badly for Hero if he had dreams of growing up to be an accountant, only to have those dreams crushed by a bad case of nomenclature.

Aged 18, he’s old enough to vote, and in Australia at least, old enough to buy his own drinks. I’m thinking health potions are going to be Hero’s drink of choice though, as saving the world doesn’t leave a lot of time for whisky.

At the age of 18, Hero is already a seasoned swordsman, and will obviously fill the typical role-class of warrior with his sword and shield, until he gets his hands on the famed Caster Gun, which will add ranged abilities and elements of magic to his repertoire.

Arcadia’s Obi-Wan equivalent is Master Mayfair, who trained Hero in the ways of the Knights, and while Mayfair has not been included in the trio of characters revealed this week, it sounds like he will play a major role in the storyline, although perhaps a non-playable one.

While Hero is young, he certainly doesn’t sound like a wallflower. Already competent with a musket, and capable of handling himself against the monsters that inhabit the woods of his hometown – Arne Village – Hero sounds as if he has a good foundation on which to build a world-saving… hero.

If Trin and Hero were to inhabit our own universe and find themselves in the good ‘ole US of A, Hero still wouldn’t go thirsty, as being 21, Trin could do the honours.

Will Trin be a love interest? Is that too obvious? They look a little alike, are they brother and sister?

The second member of Hero’s party, Trin’s weapon of choice is a Daggerang, as pictured above-left. Three blades are surely better than one, and the Daggerang is apparently good for both close and long-range combat. With the ability to be thrown, not only is Trin’s specialty weapon useful against flying enemies, but studio Cornfox says it’ll also come in handy for activating remote switches, which of course outlines the need for your party’s characters to work together in order to solve certain puzzles and proceed.

While Trin may have been born with royal blood – the grandchild of Arcadia’s Gran Regent Archimedes and Calliope – she is certainly no princess. Trin has actually shunned her royal origins and lived instead among the lower class inhabitants of White City. This sort of roguish blue-blood often makes for a likeable and useful protagonist, given their ability to move within the various higher and lower circles of society, while remaining unpretentious and willing to get their hands dirty.

As with Hero, Trin is no stranger to battle either, piloting the Arcadian ship Yellow Bird, and is described as being good-hearted yet opinionated. Something for everyone. 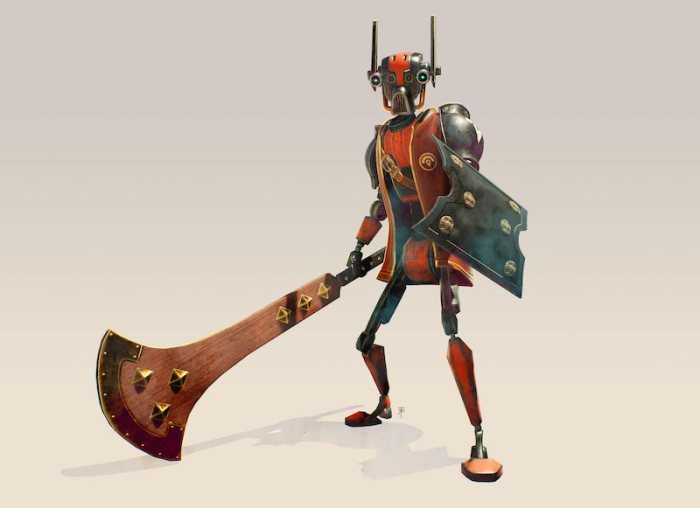 Gen is the character that does bulk damage with his heavy weapon – the mighty Battle Oar. Also handy to have around if Hero and Trin find themselves up Shit Creek without a paddle.

Sidekicks serving dual-roles of capable battle-partner and comic relief are an age-old trope in the adventure scene. Cornfox describes Gen as not one to shy away from “playfully commenting on a situation.” It always seems to be tricky for writers to make these humorous sidekick characters genuinely likeable, and not annoying. Let’s hope Cornfox & Bros. have found that special sauce for Gen.

Gen is Hero’s friend and Master Mayfair’s automaton (robot), and much like Hero and Trin, also a seasoned adventurer, having accompanied Mayfair on various outings.

It certainly doesn’t sound like there are any weak links so far in this JRPG party, with all three characters being capable in combat, with varying abilities that will no doubt work all the more effectively when combined in interesting ways.

Cornfox & Bros. have also promised dozens of non-playable characters, a few familiar faces from the original Oceanhorn, and plenty of backstories to explore.