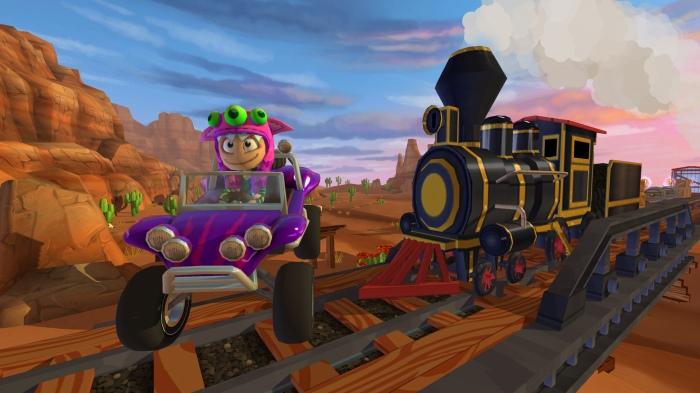 The original Beach Buggy Racing comes highly recommended from us here at ATVG, especially after receiving an update in late 2017 bringing 4-player split-screen action. This update reminded players that the best way to trash-talk is to be in the same room as the recipient, so you can see the look on their face as your well-aimed rocket causes them to lose on the last bend of the race.

We’re not the only fans though, as BBR has seen 70 million downloads since its release, which is always a pretty good indication that a sequel is on the way.

And so here we are, with BBR2 set to release this Summer (or Winter, if you’re south of the Equator).

A big focus of BBR2 will be the addition of online multiplayer, with daily races, special events, and weekly tournaments. “We knew we wanted tournaments and community to sit at the heart of BBR2,” explains Vector Unit CEO Matt Small.

Another nice sounding addition will be that powerup load-outs will be customisable, adding an interesting strategic element to the karting action. Vector Unit are promising over 50 different powerups, such as Chain Lightning, Donut Tyres, and Killer Bees, to name just a few, so there should be some pretty interesting offensive and defensive combos available. The powerups themselves will be upgradeable as well. What that means exactly we’re not entirely sure at this point, but maybe with play your powerups will be even more poweruppy; doing more damage, or perhaps altering their effects or lengthening their time of effect. Remains to be seen.

For mobile, tablet, and Apple TV, BBR2 will release as a free-to-play business model, with the console versions to release later in 2018 as a premium paid title. On Apple TV, the original Beach Buggy Racing’s free-to-play model is quite benevolent, so hopefully the sequel will mirror that.

That’s all we know for now, but we’ll keep our ears to the ground. For a look at some more upcoming games for the Apple TV platform, check out this roundup right here, and this older list which still has some unreleased titles on it.

The gameplay video below shows off one of BBR2’s upcoming tracks – Riptide Gulch – named after the studio’s liquid-based racer which we reviewed right here.