From what I’d read so far about Way of the Turtle from Illusion Labs, and from the gameplay I’d seen, I’d relegated it to my list of Apple Arcade games to try out on my iPad.

If I’ve made the effort to set myself up in the lounge room, controller-in-hand, big screen and stereo ready to go, then I want to be playing something that justifies the experience, something that enables complete agency over my avatar in a way that auto-runners don’t.

The casual gaming experience of an auto-runner makes a great fit for mobile, with touch controls enabling a style of play that many developers (such as Halfbrick with Jetpack Joyride) have managed to infuse a healthy amount of depth into, despite the casual nature.

But on the big screen I want full control.

So laying in bed on a lazy Sunday morning, I took the opportunity to give Way of the Turtle a chance, to see if it would become one of my go-to auto-runners on iPad.

I soon realised I’d rather be playing it on Apple TV. 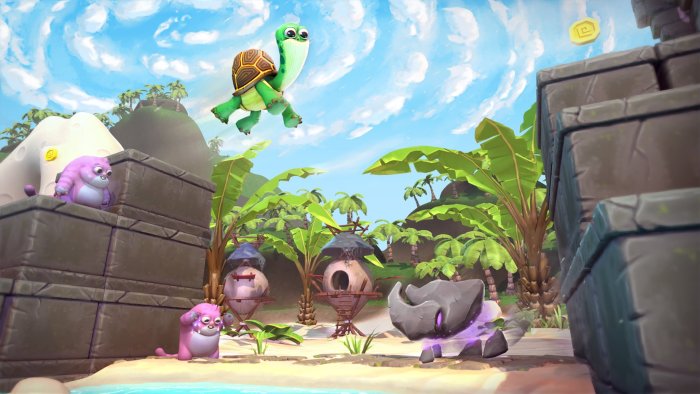 Not far into Way of the Turtle, still in the tutorial phase, players will be told they can change direction whenever they want. This is certainly not de rigueur for auto-runners.

A little further in, and you’ll learn that throughout Way of the Turtle, different coloured  shells will be found and can be equipped, the first of which is a blue shell, enabling players to stop and retreat inside your newfound protection.

So now, at will, players can change direction, and even stop. Now we are describing a 2D platformer.

It’s how the controls are implemented that might still lead some to describe Way of the Turtle as an auto-runner. Strangely enough, Real Racing 3 is a good comparison.

In Firemonkeys’ quality racer, acceleration is handled automatically – if you push nothing, your car will accelerate. Braking however, is done manually.

Similar in Way of the Turtle – push nothing, and your turtle moves forward in your direction of choice, and retreating into your shell to stop is done with the tap of a button – easy enough, but a conscious decision needs to be made. This is the antithesis of how we’ve been conditioned to play 2D platform games, but it soon becomes second nature, opening up a whole new way to perceive Way of the Turtle.

The Mr. Crab series from Illusion Labs has some imaginative gameplay mechanics to flesh out its auto-runner, by spiralling and climbing ever-upwards instead of ever-onwards left to right like most. Way of the Turtle goes beyond the auto-running limitations of Mr. Crab and ventures into full-blown 2D platforming.

Way of the Turtle has now switched lists, and awaits within my Apple Arcade folder out on the big screen via Apple TV. Along with many, many others.