Apple made it very clear leading up to the release of Apple Arcade that all games would be compatible across iOS, iPadOS, tvOS, and macOS, so it was confusing that when tvOS got its update, there were some games – such as LEGO Brawls and Sonic Racing – showing as available on iOS and iPadOS, but not tvOS.

Over the last 24 hours however, things seemed to have resolved themselves, as these games are now available on Apple TV as well.

I’d been saving Sonic Racing for the big screen, not wanting to spoil the first-time experience for myself on iOS or iPadOS, and so when it finally appeared I quickly fired up the lounge room, mashed the ‘Get’ button, and booted up SEGA’s hotly anticipated kart racer. 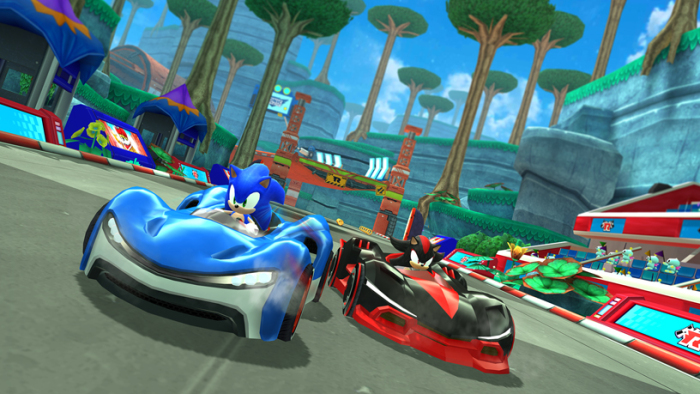 I was thrown into a tutorial race which taught me how to steer left and right, and then left me to finish the race. Which I did.

The list of participants from that race then appeared on the screen with me in control of a cursor that I could move around with the left thumb-stick. There was nothing that was clickable though, no ‘Next’ button or ‘Proceed to Main Menu,’ nothing at all. I was stuck.

I did the first thing that any I.T consultant worth their salt would tell you to do – closed down the app and reopened it. This time I got a little further.

Again, I was thrown into the tutorial race, and this time after learning how to steer left and right, I was taught how to fire the weapon I’d just picked up, thinking okay, all is well. I finished Lap 1 of 3, gradually getting more comfortable with the kart’s handling, rounded the start-line a second time, completing Lap 2 of 3, knocked that off, hit the start-line again thinking cool, soon I’ll be done with this tutorial and I can sink my teeth into Sonic Racing’s meat and potatoes. But the announcer told me that I had just completed Lap 2, again.

So again I went ’round the track, crossed the line, and was told yet again that Lap 2 was complete. It was a virtual Groundhog Day.

I closed down the app again.

I though I’d see if the iPadOS version was experiencing the same gamebreaking bug, fired it up on my iPad Air 2, completed the tutorial, and all was well, I was straight into the main menu.

Now I had hope. Ideally, now if I logged back into the tvOS version Game Center should carry over my progress from iPadOS and recognise that the tutorial has been completed and take me to the main menu. And it did.

Now I can play Sonic Racing on Apple TV with no problems at all. Happy Days.

I imagine that not many others will have experienced this glitch, as most will probably have tried Sonic Racing first on iOS or iPadOS, making for a smooth transition to tvOS. But if you’re like me and Apple TV is your main focus for Apple Arcade, and you find on loading Sonic Racing for the first time that it’s broken, try booting it up on your small screen first, and hopefully this fix will work for you as well.

Now that all is well with the world, ATVG will take Sonic Racing through its paces and see what’s what.

If you’re wondering where to start with Apple Arcade on Apple TV, head over here to check out which four games ATVG played first.

And for a hands-on look at 30 of the titles available on Apple Arcade, check out MrMacRight’s excellent video below: