After our final look in the rearview mirror at ATVG’s 2017 Pile of Shame, this week’s new release – Peregrin – seemed like a wonderful way to bring us back to the present, as Apple TV gaming continues to evolve into 2018.

This visually stunning puzzle adventure snuck onto the Apple TV platform this week, wishing gamers on the platform a Happy New Year, and providing a new and interesting set of challenges to kick off proceedings. 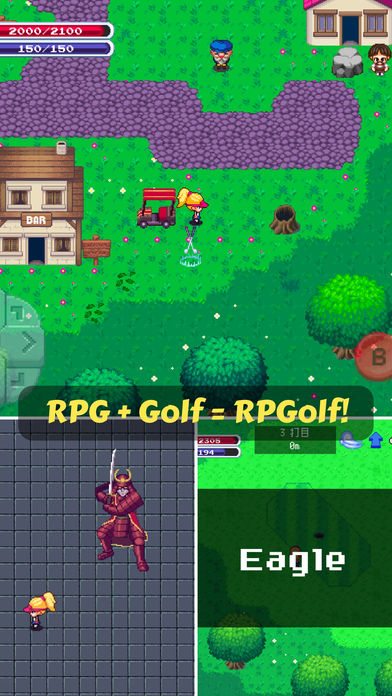 Okay so there’s no actual box per se, but you know what I mean.

All those fans of old-school, top-down, 8-bit RPGs, who have spent countless years wondering what those games would be like if the magical abilities were replaced with golf-related abilities, can finally get some relief. That particular bridge between imagination and reality is now structurally sound, and can be crossed.

In other words, this week saw RPGolf from developer Articnet release on Apple TV.

Take a swing at the page 2 button below for more. (Actual golf fans feel free to insert your own more appropriate golf-related pun here)

There is certainly no shortage of quality racing titles on Apple TV. We devoted a section to the genre in our list of Best Apple TV Games: Year One, so you can get up to speed right there. Since we put that list together, we’ve also seen the fantastic Riptide GP: Renegade hit Apple’s digital-only console, and it’s definitely worth picking up if you’re looking for something to justify gaming on your ATV. From that same studio – Vector Unit – Beach Buggy Racing is also worth a look if you’re after something in the way of arcade kart fun.

(And for something a bit different, check this out)

If you’re aware of the Sky Gamblers series noted above in the headline, you might be wondering why we’re prattling on about racing. The reason is the fifth game in the series has moved away from plane battling, and into the world of plane racing.

The trailer below shows high quality visuals typical of the series, and the action looks fast and furious. It looks like a nice twist on the series and plane racing certainly isn’t a genre within gaming that has been saturated by any means.

Sky Gamblers: Races is a collaboration between Atypical Games and Edon Games, and after a deep dive through some letter by letter alphabet searching I saw it just hit Apple TV last weekend. I wouldn’t mind betting that it might see a banner feature when the store refreshes its showcase games at the end of this week.

Check out the trailer below and let us know via the Facebook link at the top of this page if you’re having fun with it.

What is it about playing with train sets that excites us? Is it the sense of power and control it gives us? That feeling of playing God as you see your little mechanised world come to life in front of you is infectious. A small world that runs perfectly because of you.

This is the exact feeling that studio Northplay’s Conduct THIS! captures so well. And if you watch their developer diaries, you’ll know it’s Conduct THIS! and not Conduct This. There’s a big difference.

Isn’t it great when something does exactly what it says it does? This weaponised cave-flier from ThirtyThree Games landed on Apple TV yesterday, and there’s no better way to describe it than simply reiterating the game’s title – Running. Gunning. Jumping. And more gunning.

With an art style that can only be described as eyeball melting retro arcade madness, we think the bigger the screen the better for this sort of caper.

It’s great to see some movement this week on the Apple TV’s App Store, with a bunch of featured new releases. RunGunJumpGun joins Burly Men at Sea this week – a couple of freshly ported titles from iOS to tvOS that we’re keen to get our hands on.

Check out the trailer to see why:

She makes the coffee, he eats Werther’s Originals. She is the artist, he is the programmer. Right brain, left brain – Brooke and David Condolora’s Burly Men at Sea hit Apple TV today, and while this sort of choice-driven adventure may work a treat on your smart phone or tablet, the bigger the better right? Why wouldn’t you want to add 60 inches to every video game?

With gorgeous art, does size matter? I don’t know, but it sure makes it a hell of a lot easier to see from three metres away, so we’re pretty happy to see this beautiful game come to life on Apple TV.

Over at Grab It Magazine, we watched the development of studio Brain&Brain’s Burly Men at Sea with interest, and on release Grab It staff writer Stephen Mitchell had good things to say about this strange, original tale inspired by Scandinavian folklore. Now, for the most part, I trust Stephen. He’s only steered me wrong once, but that’s a tale for another time.

“To know that my choices shape the story being told gives me such a thrill that makes me want to jump right back in and tell another story: my story,” said Mitchell in his review. Tantalising stuff, and even more tantalising after learning that one half of Brain&Brain – David Condolora – left work as an assistant editor at Pixar in order to follow dreams of independence with Brain&Brain.

Today’s feature tile on Apple TV’s menu for Burly Men at Sea offers up a stylish invitation – will you accept?

With Space Marshals 2, Pixelbite has doubled its tally of twin-stick shooters available on Apple TV. The developer jumped on the new platform all the way back in late 2015, porting iOS shooter Xenowerk over to Apple’s digital-only console. The Space Marshals series then snuck onto the platform last week, making for a very welcome surprise going into the weekend.

Having jumped in and completed the first three missions of Pixelbite’s Sci-Fi Western, now seems like a good time to leave some very early impressions.

Be warned though, this story contains Space Pirates, and collectible hats.

Mooff Games are throwing a lot of love at Apple TV, with its third release for the platform just hitting today.

The first – Dungeon Time – featured in ATVG’s Best Apple TV Games: Year One, and is a fun mix of dungeon crawling, twin-stick shooting, and RPG elements.

Toon Shooters 2: The Freelancers, has graced the pages here at ATVG numerous times, also featuring in the above list from last year. A Chapter 2 update just landed not long ago, bringing five more missions and two more characters to play, and it’s a must-have for your little black box.

But good things come in threes (although hopefully they won’t stop there), and today proved the saying to be true with the release of Smash Club: Streets of Shmeenis.

Hit that page 2 button below to learn more.

It’s encouraging to see big-budget, cutting edge releases such as Horizon Zero Dawn trying to bleed every last drop of power from our latest console hardware. These sorts of triple A releases validate the spending of our hard-earned, and fulfil our hopes of seeing graphics and gameplay we’ve only ever fantasised about. It’s the ride we bought the ticket for.

It’s equally as encouraging however, to see desire – and sometimes even success – still finding room for the old genres many of us grew up with: new 2D fighters are still being released, pixel art platformers, top-down RPGs, side-scrolling shooters, and more. They refuse to fade away, and are being embraced by new gamers much the same as music lovers don’t all of a sudden stop listening to the standards just because they’re old.

One of the oldest gaming genres – the vertical shooter – has also made its way through the decades intact. While developer 10tons may not have reinvented the wheel with Xenoraid, the excellent new spin the studio has added, coupled with it’s tight gameplay execution, has resulted in a vertical shooter that is at once recognisable in its genre, and refreshing for its newness.

Hit page 2 for a closer look at why you should pony up and start shooting stuff.

Czech studio Amanita Design’s games have an otherworldly quality, an almost alien symbolic language that differs from game to game, yet always retaining a consistent, playful absurdity that somehow makes perfect sense until you start giving it too much thought.

I’ve reviewed another of Amanita’s adventures – the stunning Botanicula – for Grab It Magazine, and while it also features puzzles, it has a more exploratory feel to it than Machinarium, with the latter being a more direct puzzler, and a tough one at that. Funnily enough, and for those who have been following The ATVG Blog, Machinarium is also a previous PlayStation Plus title, which is the platform on which I played it a couple of years ago. So for those keeping score, you can add another one to this list.

If Machinarium is an aptitude test, than I failed. I’m not sure if my brain has evolved at all in the couple of years since I played it on PlayStation 3, maybe it would be interesting for me to have another crack. My brain has never really been wired up for puzzles. Abstract thinking I’ve no issue with, but connecting the dots is not my strength. I seem to prefer just making more dots for others to connect. But that’s enough about me.

Machinarium can be played either with the Siri Remote or a controller, and as with all the other former PS Plus titles that are now on Apple TV, it makes for a great addition to the catalogue, adding a nice artful entry to the lineup. The trailer below gives those new to Amanita Design’s style a wonderful glimpse into the studio’s universe, with wonderfully imaginative visuals and always stunning music that matches and complements the gameplay perfectly.

Lovers of puzzles, or just simply lovers of beautiful interactive experiences, should definitely hit the download button on this one, you won’t regret it.