You’ll start off a mere shadow of your potential, a darkened silhouette taking your first steps in the shallows. After a few meditations, touching flame to candle at various shrines, colour will start to infuse your avatar, and your abilities will start to grow.

At first you’ll be able to fly for seconds at a time, wings gifted and replenished by glowing butterflies that nourish your flight. Not too far in however, wings will be yours to cherish and float, soaring lazily in looping circles for the shear pleasure of it.

And that’s part of the beauty thatgamecompany seems so adept at bringing to its games – the enjoyment of simply being in the game and playing with its mechanics.

But a pure sandbox with no goals to beckon discovery soon gets tiresome, and thankfully Sky has plenty of mystery to uncover.

A large part of the play involves social interaction with others, which is handled initially in much the same way as in Journey, through simple calls and responses. But this social element soon deepens as players learn to give and receive candles and flames. Relationships can be upgraded to the point where you can bestow nicknames on your new-found friends. Again, as with Journey, Sky brings a very real warmth to its multiplayer aspect, interacting through gift and aid, rather than competition. For those who want to get even more personal, there are small benches on which two players can sit and write text to each other.

Within this social area, players can also spend hearts to upgrade cosmetics such as capes, hair styles, and so on. It’s unclear to me yet whether these have any gameplay effect or not. It’s also unclear exactly what all the giving and receiving of candles does at this point, and maybe it could be shown a bit better, as it seems to be Sky’s central theme. 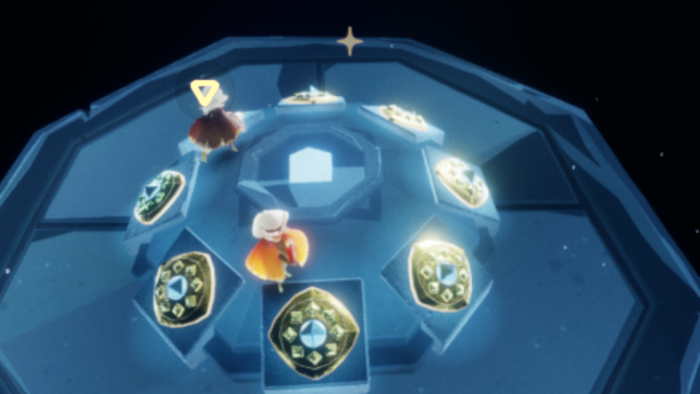 While the first large section of Sky is reasonably linear, it also has plenty of hidden shrines and temples to discover. Rolling green meadows end in cliffs overlooking vast expanses of cotton-puff clouds, over which it’s a delight to take to the air in order to head to the next island in the sky. Some of the temples, such as the one above, seem to need eight players to activate it at once, to reveal its mystery.

Eventually it was time to journey on past the safety of the rolling green islands, summoning a huge winged creature to lead me onwards.

Sky’s music enhances the gameplay and setting, alternating between sweeping orchestral soundscapes to wistful flute melodies, during which the sounds of nature – wind, birds, rustling grass – envelop your senses, drawing you into Sky’s make-believe.

Arriving on the other side, having crossed an ocean of clouds, it’s time for a quiet look back, before learning what’s next.

Sky’s controls on the iPhone work well. Two fingers to pan the camera around, one to flick forward, back, or sideways for movement, whether on wings or foot. I’m really missing the beauty of a big screen though, and it will be interesting to see how the Siri Remote handles the control scheme. I envision the touch pad of the remote being ideal for looking around and flying, maybe even the accelerometer will be utilised, but ideally, I’d love controller compatibility for the Apple TV version, enabling my Steel Series Nimbus to convert Sky to a full console experience.

The other side of the cloud ocean brings a darker tone to proceedings, with an imposing forest of trees the tops of which are lost in mist, causing me to feel storybook-lost. Rain starts to fall, snuffing my candle, completing the downturn in mood.

It’s here that I decide to break and write up my experiences so far with these accompanying screenshots.

I’m a big fan of Journey, and I’ll go so far as to say that Sky takes the foundation of thatgamecompany’s previous game, building on it in every way. The social interactions are deeper and more complex, the small amount of the world I’ve seen so far has more variety in its environments, and the gameplay mechanics of traversal and flight feel even more freeing.

And things will only get more fine-tuned, as this is still of course a test build. I’m sure I’ve missed something, but it’s not clear to me yet how the giving and receiving of candles effects gameplay, and it would be nice to see this explained in more details. Words are not necessary, but showing through more intuitive examples might be helpful.

While the test build’s servers are still open this weekend, I’ve decided my curiosity will be the winner, and I’ll jump back in for more. Hopefully I’ll get a better handle on these mechanics, and hopefully there will remain a lot left to discover on Sky’s full release.

I have to say it one more time though, the big screen via an Apple TV and controller is where Sky will live its true self. Small screens are not enough for the freedom Sky teases.

2 thoughts on “Impressions: Sky – Candle In The Wind”