I was tempted to go with:

Review: Ammo Pigs: Armed & Delicious – See How The Sausage Is Made.

But brevity is king when it comes to headlines, so here we are.

While working on its bigger, meatier title – Moon Raider – Cascadia Games started tweeting earlier this year about the possibility of an Ammo Pigs reboot. Floating the idea out into cyberspace – the modern equivalent of thinking out loud – interest was gauged and the decision was made: A new version of the 2015 iOS title was on the way.

Fast forward to a few short months later, and judging from the tweets Cascadia’s owner and founder Chris Jorgensen has been making post-release, sales of the Ammo Pigs remake have added up to time well spent.

What about from a gamer’s perspective though? Is it worth your hard-earned? 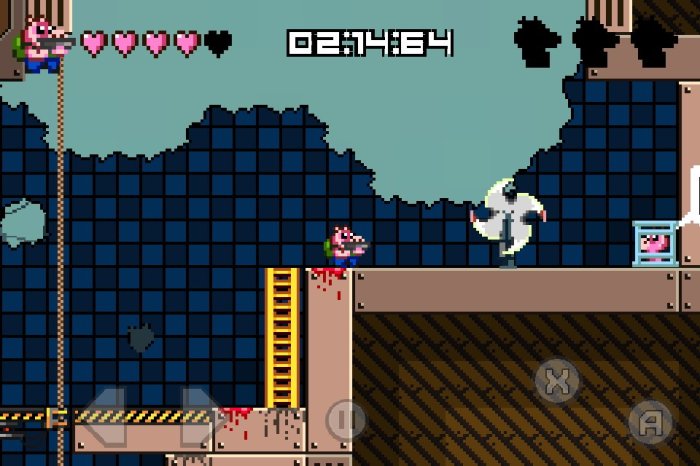 The offerings from Cascadia Games hark back to a simpler time – a time when a very small team could crank out a small, enjoyable game. The studio’s releases are unashamedly retro; more retro even than the countless “retro” titles that flood the various digital storefronts, in the hope that pixel art will convert nostalgia (for the over-40s) and retro-chic (for the hipsters) into coin.

Cascadia’s titles feel retro to their core; beyond the mere presence of pixel art, two dimensions, and platforming.

With very little set-up, and almost nothing to collect or earn, I realised at some point that I was rescuing caged pigs from each level simply because they were there to be rescued. Rescuing 50 wouldn’t earn me a bag of gold which I could then trade for a different coloured hat. There’s no weekly downloadable waistcoat to look forward to, no ads, and no currencies. Ammo Pigs isn’t a service, it’s a game – a finite, consumable experience. Buy your cup of coffee, drink it, and move on to the next cup of coffee.

This is what gaming used to feel like. This folks, is the real retro.

Before Ammo Pigs had a chance to wear out its welcome, it was over. About what you’d expect for a couple of bucks. Having said that, there are achievements and higher difficulty modes for the hardcore to aspire to: 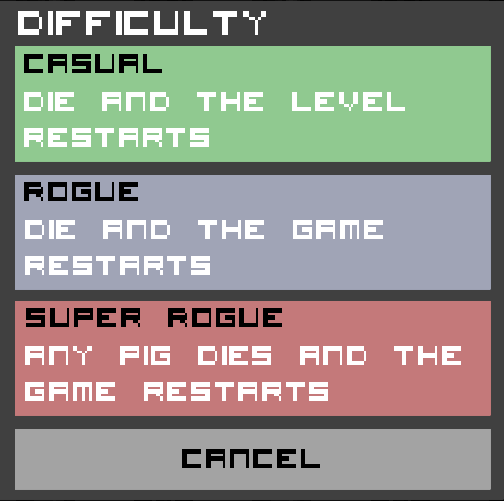 Gameplay is immediate and satisfying: Left, right, jump, and shoot. Players are armed with an endless supply of bullets (you’ll need them), and there are also rocket launchers to be found with clips of 10. Use them wisely.

There are three captive pigs to rescue from each level, and be warned, rescuing all three from all 20 levels will take some mad skills. After finishing Casual mode (with lots of almost-rescued piggies now happily in piggy heaven), I can’t even begin to contemplate the Super Rogue difficulty, and yet I know there are players in the world who will be all over it. A pro-tip might be to clear the enemies and unlock all the gates before bothering with any rescues, although this will take longer. With a clock always on-screen marking the longevity of your progress, Ammo Pigs feels ripe for speed-running obsessives.

Speaking of always on-screen, while not a big deal, it would be nice to see the transparent on-screen buttons disappear from the Apple TV version, clearly a hangover from iOS.

If you’re hurting and low on hearts, a vending machine can be found in each level that dispenses healing goodness. How do you work the vending machine? Shoot it, of course.

Ammo Pigs is the first title from Cascadia Games to make it to the big screen via Apple TV, and hopefully the first of many. While the mobile version is a nice option, cranking this sort of real retro up to a 60-inch screen with a proper controller in-hand feels like a pair of comfortable old slippers. In this wonderful world of modern gaming however, we can have our cake and eat it too, as Ammo Pigs is a universal purchase across tvOS and iOS. If you don’t have a compatible controller for your Apple TV, the Siri Remote will get the job done (but if you’re the sort of person that’s found their way to reading this site, then I highly recommend shelling out for a controller).

Will Ammo Pigs: Armed & Delicious revolutionise 2D action-platform gaming? No. Is it a worthy addition to your Apple TV gaming library?

Ammo Pigs: Armed & Delicious from Cascadia Games is a tasty slice of retro-gaming pie that will remind gamers how the sausage used to get made.