When Barbearian first released for iOS back in August, straight away after watching the trailer I added it to my mental wish list of games that would hopefully come to Apple TV.

About 24 hours ago my wish came true, in the form of an email from Kimmo Lahtinen, letting me know that his studio – Gimblll – had just released Barbearian for tvOS earlier this week on Monday.

After a quick download and a couple of hours of game time, I’m punching keys in the ATVG bunker to tell you that Barbearian is the real deal – a true console experience that I have absolutely no hesitation in recommending. 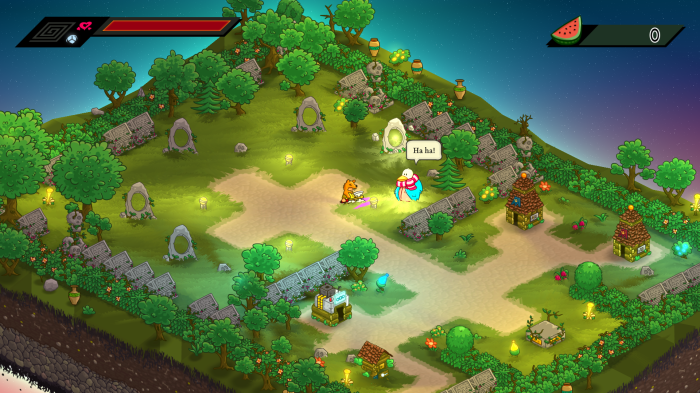 Outland, Resogun, and Dead Nation from Housemarque are some of the finest twin-stick shooters around (although Outland is more a twin-stick/platform hybrid), all three of which I’ve had the pleasure of experiencing on PS4. After learning that Lahtinen was a creative force behind these titles, the ambitious quality of Barbearian started to make more sense.

There’s so much to talk about that I’ll save for a longer article, but for now I just wanted to convey a sense of what Barbearian has to offer, how complete and polished it feels, and just to simply put the word out that it’s available right now for Apple TV. As an Apple TV gamer, you deserve to know this exists.

Fans of hack ‘n slash adventures and twin-stick shooters will appreciate how immediate and action-oriented Gimblll’s release is, and those who also enjoy tower defence elements and upgradeable abilities will discover there is depth to the combat.

Guiding your bear through beautifully realised (and destructible) environments, cover can be used to funnel enemies through pathways, making their numbers more immediately manageable. Vanquishing enemies yields loot in the form of food, glorious food, which can be spent in shops on weaponry and abilities.

Beating levels also releases prisoners that return the favour by fighting alongside your weaponised bear. These minions of yours can be upgraded into knights or archers, and as I’ve only just scratched the surface with Barbearian, it feels like there is a lot yet to uncover.

At the end of my first few hours I’ve started to open up a larger world that begs exploration through interconnected portals, and have begun to get the sense that Barbearian’s titular bear is part of a strange, seemingly conspiratorial mystery.

Barbearian requires a controller, is a premium game that once bought has no ads or in-app-purchases, and is also universal across iPhone, iPad, and Apple TV. ATVG will continue plumbing its depths to bring you the bigger picture.