Update: Since posting this story Apple has since brought the release of iPadOS forward one week from September 30 to the 24th. For The Apple TV Gaming Blog however, September 30 is still where the big cheese is at. Read on, folks.

Original Story: It’s all in the name: The Apple TV Gaming Blog.

At WWDC 2016, Apple unveiled the fourth generation Apple TV. I’d already been making good use of my third generation Apple TV for streaming media, but when these slightly taller, slightly fatter hockey pucks hit shelves, I bought one, along with a Steel Series Nimbus controller; I realised I’d seen the invention of a new gaming console, and I wanted in early. Hands-on.

Halfbrick’s Dan The Man was a revelation. It didn’t innovate, but it felt so fresh. A 2D action-platforming brawler with a main character that felt like a mascot.

In December 2016, the lights were turned on in this new little corner of the Internet I’d made my own, and Dan The Man holds pride of place as ATVG’s first ever review. Everything that I wrote in that review I stand by today. Dan The Man encapsulates the arcade-immediacy that both honours the past and embraces modernity – without cynicism. Homage and respect, not nostalgia.

Three years on, here we are, at Apple Arcade.

That’s what really did it, that screenshot above. After accidentally loading up Dan The Man without my Nimbus connected and seeing that screen, it hit home that this fourth generation Apple TV could really go places. It was a console searching for an audience, and it turns out it only had to wait three years.

Real Racing 3 was another early console-validator, despite a user-interface that struggled to break free of its mobile beginnings. The gameplay was pure big-screen racing, with slick, eye-candy graphics, and tonnes of cars, tracks and tournaments. Thankfully, the UI has been refreshed and is much friendlier to navigate nowadays too.

And that was always a major factor that held Apple TV back – that need to cater for the fact that every game on Apple TV was essentially a mobile game blown up to fill a big screen. Some games however, became so much more when elevated to console-status. Take Rayman Adventures for example – on mobile it was a very slick auto-runner. Pairing Rayman with a controller though granted full left and right movement with the ability to actually stop, making for a full-blown 2D platform game. Add a luxuriously sized screen and Rayman Adventures became another showcase-title for the potential of Apple TV gaming. 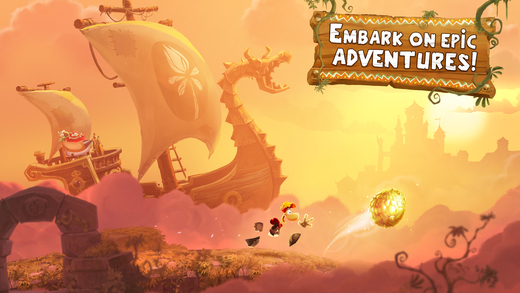 Since then, it’s been a ride.

And with Apple Arcade about to hit Apple TV via tvOS 13 on September 30, it feels as if it’s just the beginning.

But to get back to the point of the intro, Apple TV, especially for The Apple TV Gaming Blog, is the focal point of Apple Arcade. It’s a console, and while gaming on the small screen has its place – and I can’t wait to try out some of the more casual experiences on my iPhone and iPad – I’m saving the deeper console-experiences for September 30.

For ATVG, Oceanhorn 2 will be freshly unwrapped in all its big screen glory, as will ShockRods, Sonic Racing, and Shinsekai: Into The Depths. And so much more.

October will add yet another option for the mouse and keyboard crowd via macOS Catalina. Once open to all of Apple’s platforms, all the games will be able to be left off and picked up between all-sized screens, whether they’re small enough to fit in your pocket, taking up half the desk space in your office, or large enough to hang on your wall. Anytime, anywhere.

Subscription services are not new – I’ve subscribed to PlayStation Plus since the PS3 days – but it’s not hyperbole to say that Apple has yet again disrupted an industry with Apple Arcade, bringing its inimitable twist to what’s been done before. Game changer is a bad pun, and an accurate one.

With the breadth of the games on offer, the modest price, and the options for gameplay across your range of devices to suit your preferred play-style, Apple Arcade makes for a serious disruption to an industry that does best when shaken up every few years.