We’re a little shy of two weeks into a world in which Apple Arcade on Apple TV is a thing. And what a thing it is.

What phase are you in?

Personally I spent the first week in a phase of trying game after game for 15 minutes to half an hour while waiting for another one to download and so on and so forth. During every game I played, I felt sorry for all the games I wasn’t playing.

After that first week, I felt myself moving into a second phase which involved going back to the games I’d briefly tried but really enjoyed on the big screen, such as Spidersaurs, Exit the Gungeon, Sonic Racing (a bit broken at first, but here’s how I fixed it), Oceanhorn 2, Punch Planet and a bunch of others, and spending some more prolonged, quality time with them.

And then along came Dead Cells. What a distraction that was. And still is.

So now I’m alternating between runs in Dead Cells, and spending some solid time with Oceanhorn 2. All the others will have to wait patiently for their turn, I’ve only got two hands.

None of this is taking into account the multitude of Apple Arcade games that are a really nice fit for iPhone and iPad, which I’ve been dabbling in as well.

Prior to Apple Arcade’s launch, I posted this list of 61 games that I knew were coming to the service, but post-launch, many of them haven’t yet arrived. With that earlier list now redundant, I thought I’d filter out all the ones that launched, and post a new list with just the ones that haven’t, plus a couple more I’ve since learned about. As with the earlier list, I’ll look at updating this new list as more information comes to hand.

In total you’ll find 30 games over on page 2 that are on the way, and right about now would be a great time for Apple to start building some hype for what’s to come beyond the initial launch stage. While there’s already way too many games to have gotten through already, players will want to start looking to the future to see if the free trial they’re currently enjoying is worth converting into a paid subscription.

It’ll be interesting to see what sort of rhythm Apple Arcade settles into for new releases. Will they be weekly? Monthly? If it proves successful will we see some big hitters come to the party to sweeten the deal for consumers?

The future feels bright right now for Apple TV gaming as we bask in the afterglow of Apple Arcade’s launch, and hopefully there will be some big announcements to talk about in the coming weeks.

And mash the Continue button below for more.

“After career choices force them down separate paths, Alex and Sam vow to make their relationship work despite the challenges of living apart. Though they frequently communicate through text messages, misunderstandings are inevitable and cause the characters to erect emotional barriers that physically bar their path. By folding the pieces of paper these characters inhabit, players are able to help the couple safely navigate around their relationship hurdles and find a way forward.” – Lightning Rod Games

Update: Ballistic Baseball is out now on Apple Arcade.

Beyond a Steel Sky – Revolution Software

Update: The Bradwell Conspiracy is out now on Apple Arcade.

Original: “The year is 2026. It’s Summer Solstice, and Bradwell Electronics is celebrating the launch of its ‘Clean Water Initiative’ – a technical breakthrough guaranteed to change the world – at its prestigious Stonehenge Museum. But as the event unfolds, it becomes clear; there’s something seriously amiss… A searing bright light engulfs the room.

You wake up, disoriented – your throat ragged and raw. Rising from the rubble, it’s not long before you come across another survivor; Amber – trapped on the other side of a locked doorway.” – The Bradwell Conspiracy official website

Update: Decoherence is out now on Apple Arcade.

Original: “Decoherence is a competitive action/strategy game where you build robots, devise a battle plan by configuring their A.I and fight alongside them. Get ready to put your strategic thinking, sharp reflexes and adaptability to the test.” – Efecto Studios

Update: Doomsday Vault is out now on Apple Arcade.

Update: Down in Bermuda is out now on Apple Arcade.

Original: A new game from the makers of Agent A.

Directive Games showed off its AR project The Machines onstage at Apple’s 2017 keynote, and the artwork above promises more tech-style battling. Keen to learn more about this one. 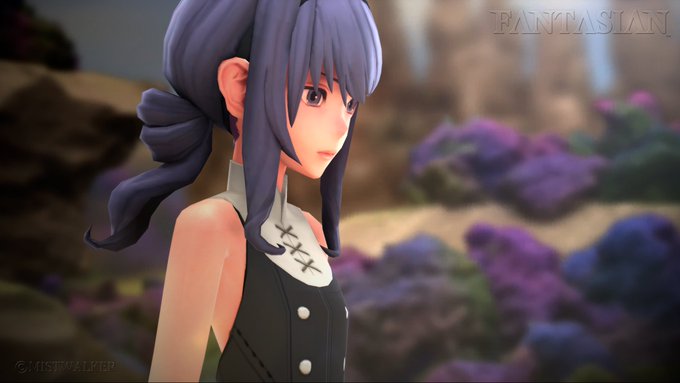 “The new world of Fantasian comes alive by merging handcrafted dioramas with 3D CG — with the technology and tools available today, we’re able to breathe new life into our game design and world building.” – Mistwalker

“In Hitchhiker, the player catches a series of rides on the highway without knowing the answer to this most basic question— who am I, and where am I going?” – Mad About Pandas

Update: Inmost is out now on Apple Arcade.

Original: “Inmost sees you controlling three playable characters, each with their own unique gameplay mechanics, within one dark, interconnecting story. The narrative is intricate and set across two worlds, weaving together a tale of suffering, sacrifice and a family stuck in the middle of it all.” – Chucklefish Games

“A narrative journey about play itself, touching deeply on the belief of we only get old because we stop playing. Targeted at a more mature audience, it is an expression of the value of creativity in a coming of age story, set amongst a micro LEGO world heavily inspired by our AFOL (Adult Fan of LEGO) community.” – LEGO

Update: Lifelike is out now on Apple Arcade.

Original Story: A beautiful looking game that looks like it might be a nice meditative experience on touch screens.

“In 1962, NASA were trying to put a man on the moon. In a remote corner of Siberia, a Soviet cosmonaut was heading in the opposite direction…” – The Chinese Room

Update: Manifold Garden is out now on Apple Arcade.

Original: “Manifold Garden is a game that reimagines physics and architecture. Explore the infinite and master the impossible.” – William Chyr

Update: Monomals is out now on Apple Arcade.

Original Story: “Not much information has been released yet, but you can tell from the trailer above that Monomals looks to be cut from similar cloth as Heroki, with its striking colour palette and art style.

We also know from the trailer and the game’s official site that Monomals will have players fishing to catch the mystical sounding creatures, and using them in some way to create music. These compositions can then be shared online.

The mechanics that enable this fishing and music composition are still under wraps, but as we usually say here at ATVG, when we know more, you’ll know more. So stay tuned.” – The Apple TV Gaming Blog – July 2017

Update: Mosaic is out now on Apple Arcade.

Original Story: “Mosaic is a mysterious narrative game, where you follow the repetitive and lonely life of an average commuter…. Until one day, when strange things start happening.” – Krillbite Studio

Update: No Way Home is out now on Apple Arcade.

Original story: Another one that is a bit of a mystery at this stage. I could probably muster up a thousand words about the picture. 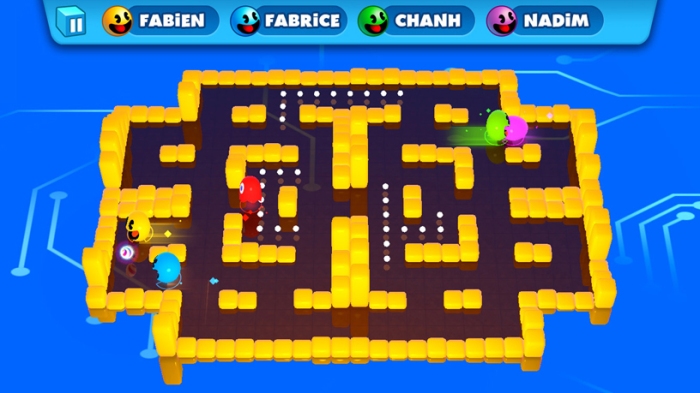 Update: PAC-MAN Party Royale is out now on Apple Arcade.

Giant Squid announced in recent weeks that The Pathless has been delayed until 2020 in order to make improvements.

“Proxi is a new AI simulation game from the Sims, Sim City and Spore creator Will Wright  and executive producer Lauren Elliott, creator of the Where in the World is Carmen SanDiego game series.” – Proxi’s official website

Update: Redout: Space Assault is out now on Apple Arcade.

This one is from the makers of the Monument Valley series, making it a highly anticipated title. The pressure’s on, Ustwo.

Update: ShockRods is out now on Apple Arcade.

Original: ATVG had a closer look at the details in a recent post. Really looking forward to checking this out on the big screen via Apple TV.

“Stainless Games are back with a brand new IP featuring all the over the top, in your face vehicle combat that you have come to expect from this world class dev studio. ShockRods is a 6v6 or 12 player free-for-all arena shooter, bringing all the blisteringly fast-paced action, mayhem and overpowered weapons you would expect.” – ShockRods

Update: Sociable Soccer is out now on Apple Arcade.

Apart from that GIF, still just a big fat mystery.

Update: Steven Universe: Unleash the Light is out now on Apple Arcade. 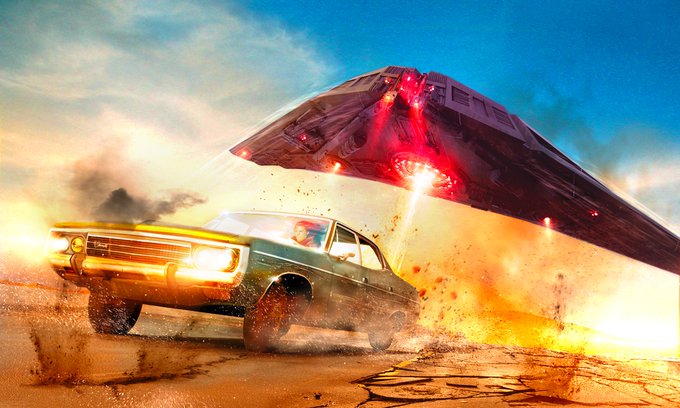 Update: UFO on Tape: First Contact is out now on Apple Arcade.

Original Story: The makers of charming mobile title Gesundheit!, Revolutionary Concepts have been drip feeding some amazing looking teasers via social media for UFO on Tape: First Contact. ATVG has the feeling that this is the sort of game where the less we see before release, the better.

Update: Yaga is out now on Apple Arcade.

Original Story: “An action RPG with light rogue-like elements about a one-handed blacksmith sent on impossible quests by an envious king. Enter the gloomy world of Eastern European folklore and mythology, rich with deadly creatures, charming characters and lots of secrets!” – Breadcrumbs Interactive