In my mind’s eye I’m standing at the foot of a wall of games, leaning back and craning my neck as it stretches up endlessly out of sight.

I watch trailers and start downloading titles madly, adding them to the newly created folder I’ve called Apple Arcade. All I’m succeeding in doing is transferring Apple Arcade to my folder. This isn’t helping.

I’m mesmerised by those beautifully stylised joysticks signifying the different categories – Action, Adventure, Platform, and my three favourite letters of the alphabet – R, P, and G.

So I pick four, and decide on an order. You’ve gotta start somewhere right?

The problem is, there’s so much to find on Apple Arcade. Let me rephrase that, as the word problem feels way too first-world. The ice-caps are melting and I’ve got too many games to choose from. Let’s call it an opportunity instead, that feels better. That feels right.

Apple Arcade is an opportunity for gamers to get lost in a beautifully curated treasure trove of gaming goodness. From the menus, to the trailers, to the stylised joysticks, everything feels so lovingly crafted – it’s as if Apple just all of a sudden got it. Got gaming.

Perusing the catalogue on Apple TV for the first time today after donning my Beats Solo 3 Wireless headphones, and Steel Series Nimbus in-hand, it was like I’d unboxed a brand new gaming console pre-loaded with every option I could imagine, with Apple promising so much more on the way.

I chose the Nimbus because I wanted 40 hours of battery life, not single figures from my DualShock 4. I don’t want to have to charge before every session. Not with all these options.

I’m rambling and this all sounds very hyperbolic, but I’m just trying to capture the excitement that is genuine and real.

It’s finally here – after nearly three years of gaming on Apple’s little black box, after a very slow start to 2019, and thinking there was still one week to go  – here we are.

And what did I play first?

I thought I’d ease my way in with something very immediate and arcade-like, something that didn’t require any real exposition to get into. I wanted to start playing already.

Moving Pieces Interactive have crafted a wonderfully polished piece of work with Dodo Peak – a 2D platform game played out on an isometric plane not unlike Q*Bert.

Guiding a Dodo up and down a mountainside to rescue hatchlings and guide them home through increasingly difficult obstacles is lovingly executed, feeling both classic and fresh at the same time.

Players will also be collecting coins which are redeemed for different Dodo characters with varying attributes. And here’s where Apple Arcade first reminded me of one of its greatest strengths: I’m collecting coins, but I’m never prompted to buy a pack of them for $2.99 or watch an ad for a free chest-full. Collecting coins is now no longer about monetisation – it’s now about adding to the gameplay. Not adding to the frustration. It’s insanely refreshing.

Because of course you’ll remember that no games on Apple Arcade will have in-app-purchases. Subscribe, download, play endlessly with no interruptions. Just like we used to.

I unlock the third Dodo character – the Explorer – and decide it’s time to move on to new adventures. But I’ll be back. I really want the Funk Dodo. Gotta get me some Funk Dodo.

More arcade action, this time from Wayforward, and this time players are armed to the teeth.

After an intro that bordered on wearing out its welcome, the classic 2D run-and-gun gameplay more than made up for the wait.

A nefarious tech company has been creating nourishing meals out of dinosaurs and feeding them to unsuspecting participants, causing them to develop useful powers. These accidental (?) side-effects come in handy when the dinosaurs escape, at which point our unsuspecting and up until now under-achieving participants are turned into adrenaline mainlining action junkies, all too eager to carve shit up.

Scrolling left to right, players will find extra weapons, two of which can be carried at any one time, and swapped when needed. Some have area-of-effect damage, others are straight-up bullet geysers. Picking up a weapon that’s already in your arsenal will cause it to upgrade, while finding meals along the way will upgrade your abilities, such as being able to climb the walls. Like a spider.

As with Dodo Peak, Spidersaurs feels classic yet fresh, something old and something new all at once. And it’s all wrapped in a beautifully polished package that promises absolute mayhem ahead. Can’t wait to dive back in. Gonna need more hours in the day. And night. 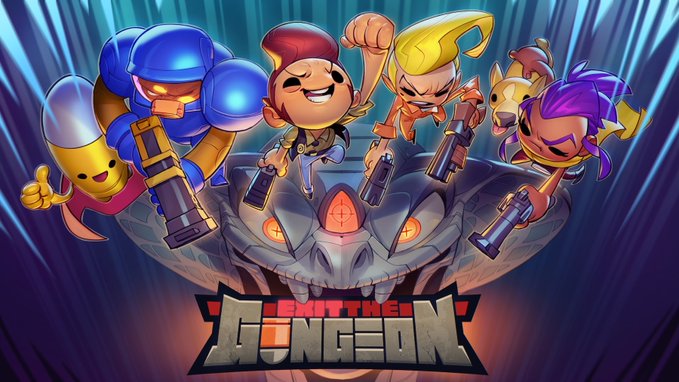 Man, three games in and I’m blown away by the quality I’m seeing so far. In Australia – the home of ATVG – Apple Arcade is $7.99 a month, and for $7.99, to think I’ve already got unlimited access to Dodo Peak, Spidersaurs, and Exit The Gungeon, with so many more yet to try is a very impressive start. And the first month is free.

A sequel to Enter The Gungeon (which I haven’t played), Exit The Gungeon from DodgeRoll is difficult to just dip in and out of for a short time. Exit The Gungeon straight away creates a universe I want to spend a lot of time in, with gameplay that I can see will be as tough as nails but I already know I want to get better at.

A 2D bullet-hell shoot-em-up with randomly changing gun types and a tonne of personality, this is yet another very high quality title for the Apple Arcade folder.

After completing the tutorial I’m quickly creamed a couple of levels in. As with Dodo Peak and Spidersaurs, I’ll be setting aside some serious time for many return trips to Exit The Gungeon.

Can you guess what game number four is?

Oceanhorn 2: Knights of the Lost Realm has been a long time coming, and ATVG has been paying attention the whole way. I’ve actually been following its development by Cornfox & Bros. since my Grab It Magazine days.

Recently I posted a roundup of all of ATVG’s coverage of Oceanhorn 2, and it’s a great way to get up to speed. It was great to finally be able to take control of Hero and try out that Caster Gun on a few very aggressive crab-like critters who I definitely think deserved both the gun, and the pointy end of Hero’s sword.

Oceanhorn 2 promises to be a big, meaty adventure, and jumping in for a few short minutes tonight almost does it a disservice, but I couldn’t resist after writing about it for the last few years. It had to be done.

Some serious hours will need to be dedicated to this lovely looking adventure.

Following a very foreboding introduction that sets the scene for an epic tale, I go for a  short run around the first island, discovering some hidey-holes and more crabs critters that had it coming. They started it.

Finally, after a taste of four games I pull the ripcord and I’m out.

The three very immediate action-arcade offerings I tried tonight all brought something very different to the banquet, followed by Oceanhorn 2, which is on a vastly different scope all of its own, hinting at a service that while I’ve only just dipped my toe into, I’m already running out of superlatives for.

This rivals any gaming service on any platform.

Apple Arcade is here, and Apple TV gaming has only just begun.